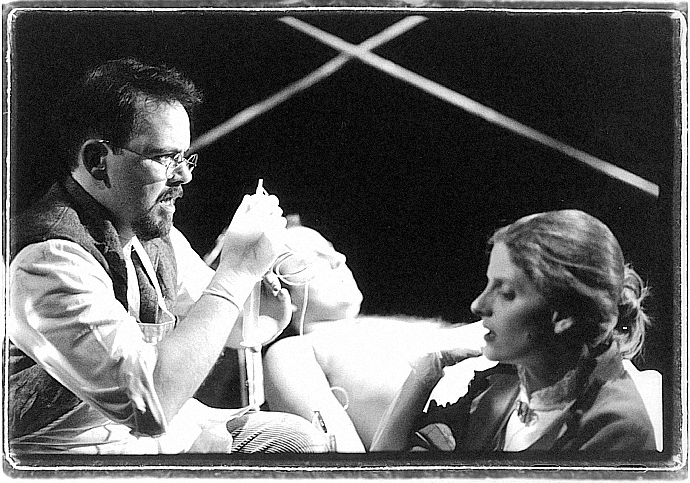 Good Jew A solo performance based on interviews with a Holocaust survivor presented in the United Solo Festival at Theatre Row, NYC.

Origins of Broadway Conceived and performed by Ralph Lewis. A Virtual Talk and Tour of the Beginnings of Broadway presented by The New York Adventure Club.

The Astor Place Riots: America's Deadly Theatrical Rivalry Created & performed by Ralph Lewis. A Virtual Talk and Tour of the first time in U.S. history that our government shot and killed its own innocent citizens. Presented by The New York Adventure Club.

Janes Return A promenade performance from Greeley Square to Madison Square Garden, with stops at landmark architecture in imminent danger of destruction as part of the Municipal Arts Society's Jane's Walk, May 6-8

Monuments by Diane di Prima. A promenade performance of the 1968 play by the celebrated Beat poet and author. Cornelia Street, Greenwich Village; September 12-15

Behind the Curtain Conceived and performed by Ralph Lewis. A Virtual Talk and Tour of the Beginnings of Broadway, an online benefit for EAG, New York, NY

Behind the Curtain Conceived and performed by Ralph Lewis. A Virtual Talk and Tour of the Beginnings of Broadway, presented by Untapped Cities, New York, NY

Before and Behind the Curtain by Ralph Lewis, a work-in-progress showing, The Greenwich Village Society for Historic Preservation

Nobody Brings Anything Small into a Bar, a work-in-progress showing of our site-specific performance for bars, Jimmy's No. 43

Floydada by Barry Rowell, a site-specific production and gallery show in a TriBeCa storefront at 40 Worth Street

3Christs by S.M. Dale & Barry Rowell, a site-specific production in the sanctuary at Judson Memorial Church

Before and Behind the Curtain by Ralph Lewis, a solo work adapted from an 1853 book about Manhattan's earliest theaters and the birth of Broadway, Tompkins Square Library

Son of Cock-Strong by Tom Murrin, in the Full Moon Festival tribute to Tom's life and work, The Club at La MaMa

Nobody Brings Anything Small into a Bar, a work-in-progress showing of our site-specific performance for bars, The Lounge at Dixon Place

Manna-Hata by Barry Rowell, a promenade performance event throughout two floors of the James A. Farley Post Office, NYC

Spring Pictures of the Floating World and The Art of the Bedchamber, a performed installation "pleasure palace" inspired by classic Asian erotica, in a former basement screening room.

The Ellen Stewart Way, a site-specific promenade performance by students from our Trinity/La MaMa master class, 4th Street between Bowery and Second Ave.

Can You Hear Their Voices?: A Play of Our Time by Hallie Flanagan and Margaret Ellen Clifford, adpated from a story by Whittaker Chambers, at a pop-up retail space, 2 Great Jones

At This Site: Houston at Bowery and Chrystie, a site-specific performance by students from our Trinity/La MaMa master class through the Whole Foods Bowery Market

Halloween at the Merchant's House Museum: holiday-themed ghost tours and an 1865 Funeral re-enactment

Along the Bowery, a site-specific promenade performance by students from our Trinity/La MaMa master class, Bowery between Cooper Square and Spring Street

The Beggar's Opera: In Concert, original music from our production, Zipper Factory Tavern.

Hector by Robert Heide, The Living Room of The Gershwin Hotel.

A Quick Nutbread to Make Your Mouth Water by William M. Hoffman. The Loft @ 595 Broadway OR SoHo Loft.

OFF Stage: the East Village Fragments, a walking performance celebrating the birth of downtown theater.

OFF Stage: the West Village Fragments, a walking performance celebrating the birth of downtown theater.

In Praise of Folly: the Don Quixote Project, 40 Worth Street,13th floor, TriBeCa

at odds: A Collection of Peculiar Works, Vineyard Theatre S.P.A.C.E. Grant recipient: Freiheit Makes a Stand, Be Silent, Be Still, The Ministry, Mirror My Eyes My Window, Vineyard Theater on E. 26th Street

Gat Him to His Place by Ruth Margraff, HERE, The American Living Room Director's Series

It's Good Enough For Me by Barry Rowell, Empty Space Theatre NYC

Before I Wake by Barry Rowell & Quazimodo! by David Koren, National Shakespeare Conservatory

The buzz on our productions

Some photo galleries from previous productions

Top: Scott McKinley and Catherine Porter (foreground) with Ralph Lewis in BEFORE I WAKE, 1993. Photo by Barbara Yoshida.
Above: Catherine Porter and Nick Mathews in "Why Hannah's Skirt Won't Stay Down" by Tom Eyen in OFF STAGE: THE EAST VILLAGE FRAGMENTS, 2007. Photo by Stefan Hagen.