After one more fight with his wife, Manny has moved out; things aren’t any better with the other woman, and now he’s been fired by his female boss. He thinks women are out to get him, and he might be right. It’s already been a very bad day, but it’s about to get worse, and weird. When he returns to his rundown motel room, a mythical Hare-Woman is lying in wait. Is she a dream, a hallucination, or an encounter from another dimension?

An absurdist look at masculinity through a contemporary "female gaze," Intuitive Leap investigates continuing gender divisions by conjuring a mythical Hare-Woman to confront a desperate man’s belief in his superiority—over women and all other creatures. Do new gender paradigms threaten today’s male psyche? Can women’s intuition cancel male aggression? Will men accept a world where they are no longer in charge? This feminist story leaps out of reality in a metaphorical execution of traditional manhood that demands a new gender balance. 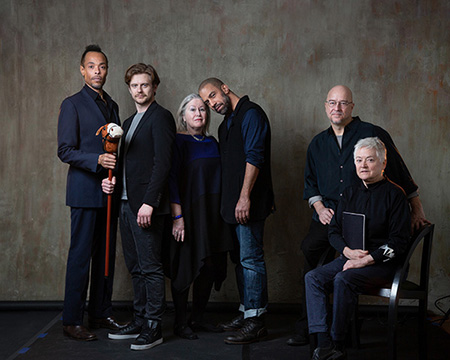 Our Peculiar Works projects are being made possible with public funds from is made possible by the New York State Council on the Arts with the support of Governor Kathy Hochul and the New York State Legislature, NYSCA-A.R.T./New York Creative Opportunity Fund (A Statewide Theatre Regrant Program), and private funds from The Ken Glickfeld and Kris Hall Foundation, the Dime Community Bank Fund for NYC Theatres, a program of the Alliance of Resident Theatres/New York (A.R.T./New York), the Mental Insight Foundation, and the Indie Theater Fund's Big Mini Give and Take, as well as our many, wonderful, individual donors.

The Hare Trilogy: Parts I and III