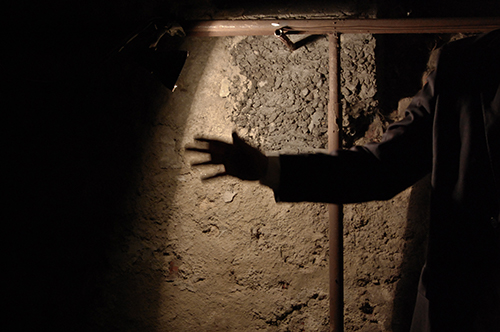 "No trace anywhere of life, you say, pah, no difficulty there, imagination not dead yet, yes, dead, good, imagination dead imagine."

An enigmatic 1000-word story written by Beckett in the 1960s and "distilled" by him over years into a taut, haunting monologue. In this rarely seen work (last presented in NYC by Mabou Mines in 1984), author and character, black and white, hot and cold, man and woman—endless and infinitely small—oppose each other and mingle in a both despairing and elevating vision.

This production was created for the basement space of the Atelie PLASTELIN, a small, cozy venue for independent contemporary theater and art near the center of Sofia. It was presented in the 2014 ACT Festival for independent, non-governmental, contemporary performing arts organizations and artists in Sofia.

The triumvirate who founded Peculiar Works