for the 173rd anniversary of this legendary event

Please join us from your home—or wherever—and get the inside scoop on this incredible moment in NYC history: a cautionary tale ripe for today’s divisive political culture. 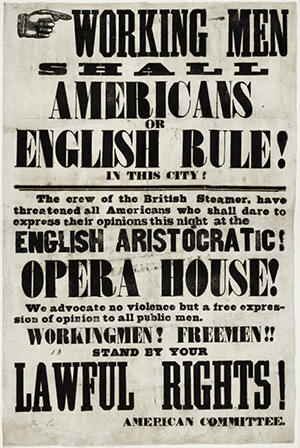 May 10, 1849, New York City. The bitter theatrical rivalry between two of the world's best Shakespearian actors — American Edwin Forrest and British William Charles Macready — was reaching a crescendo. At that point, Forrest's rise as an actor through New York's middle-class theaters made him an American hero to working-class fans from rough-and-tumble neighborhoods like the Bowery and Five Points. Macready, on the other hand, was regarded by the wealthy class as the greatest British actor of his generation — translating to the best actor on Planet Earth as Britain was considered the gold standard for theater.

But it’s much more than a fight between the two biggest stars of their day: the riots represent a national tragedy unlike anything before—the first time in U.S. history that our government shot and killed its own innocent citizens. You'll hear verbatim reenactments from contemporaneous descriptions and see how it all unfolded with dozens of rare images. It's not only a requisite for all theater-lovers, it's a prescient story that every American should know.

Our Peculiar Works projects are being made possible with public funds from is made possible by the New York State Council on the Arts with the support of Governor Kathy Hochul and the New York State Legislature, NYSCA-A.R.T./New York Creative Opportunity Fund (A Statewide Theatre Regrant Program), and private funds from The Ken Glickfeld and Kris Hall Foundation, the Dime Community Bank Fund for NYC Theatres, a program of the Alliance of Resident Theatres/New York (A.R.T./New York), the Mental Insight Foundation, and the Indie Theater Fund's Big Mini Give and Take, as well as our many, wonderful, individual donors.

Site-Specific (above): The audience being served their dinner by the waiter-dancers in AFTERPARTY: THE ROTHKO STUDIO, 2019. Photo by (DLW Photography)/Dan Lane Williams.